Playing Some Hick-Hop with Cowboy Troy

Posted on December 22, 2014|Posted in News|Tags shows |Leave a comment 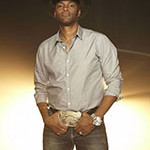 I played a show on Saturday with a country rapper (honest!) named Cowboy Troy. He’s part of Nashville’s MuzikMafia and performs songs in a style he refers to as “Hick-Hop.” He’s become well known for his recordings and shows with country stars “Big and Rich.” He performed songs from several of his records including King of Clubs and Black in the Saddle. Rehearsing and playing with him was great fun and he was a nice guy to boot. His backup band for the show was made up of two guys I love to work with, Joey Banks (drums) and Dan Kennedy (guitar), and two musicians I’m familiar with but had never worked with before, Beth Kille (guitar) and Meghan Rose (bass). Beth put the band together and made it all happen. You can check out Troy at http://cowboytroy.com.