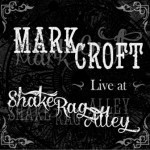 Mark’s new album, Live At Shake Rag Alley is out now. The recording was made at our show there last summer. It captures the band’s live energy and includes songs that Mark hasn’t previously released. John Urban and his crew captured some great video as well that night.

The album is available on iTunes and at Mark’s site. Check out all Mark’s news and upcoming shows at http://markcroftmusic.com.