Posted on May 16, 2013|Posted in News|Tags recordings, Hal Leonard |Leave a comment 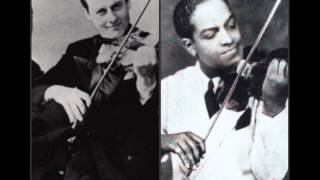 I recorded a cool project for Hal Leonard Publishing yesterday, a book of Stéphane Grappelli and Eddie South transcriptions. The Grappelli recordings that I covered were from early in his career. I’ve always preferred this period over his middle and later years. It’s just more driving and swinging, in my opinion.

There was enough fancy playing to recreate already, but one of the trickiest tunes was sped up a whole step on the original recording. (You can hear this by paying attention to the open strings). What was flashy in A minor becomes a real bear to actually play in B minor. There were a couple of open-string harmonics I had to fudge but overall I think it turned out really well. This was definitely the most demanding Hal project I’ve done so far.