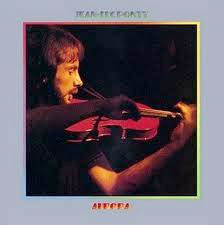 It’s time for another Ponty transcription! This is Ponty’s intro to Part II of his tune, Aurora , from the album of the same name. It’s a killer solo played over a simple, repeated rhythm from the keyboard and guitar.

The tune is in 7/4 and is straightforward for the first twelve bars. Bars 13 to the end of the solo have a 7/8 feel and are beamed to reflect that.

I love this intro! In your right ear is Patrice Rushen (maybe best known for her tune “Forget Me Nots,” which is the sample for Will Smith’s hit, “Men In Black”) playing electric piano through a wah pedal. On the left side is Daryl Stuermer (Phil Collins, part of the live Genesis band) on guitar.

The intro is in 7/4 and the chords are V, IV, I in F. (The chords are all dominants, like a blues tune.) The guitar and keyboard play a repeating one-bar figure of accented 16th notes on the root of each chord, starting on the IV chord, Bb7. That’s the backdrop for the solo violin.

In the 13th bar, Ponty switches his feel from 7/4 to two groups of 7/8, though the backing riff stays the same. I beamed the music to reflect that and make it easier to play.